The Last King of Egypt Slots 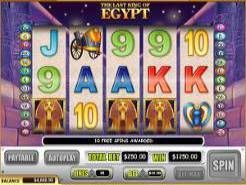 Play Now
The Last King of Egypt slots is a delightful solid slots game from WGS Technology offering players five reels and twenty-five paylines filled with Egyptian memorabilia and symbols. Set on the background of an ancient tomb, the Last King of Egypt slots reminds players of the great country that Egypt once was, ruling the lands and creating many ideas and concepts that are still used today. Symbols in the game all reflect the ancient world that Pharaoh lived in. The legacy of the last king of Egypt lives on today and players can bask in his legacy when playing this slots game that includes a sphinx, the king himself, the queen of the time, horses and carriages and other items from that era.

The Last King of Egypt slots is classified as a video slots game. It has five reels and twenty-five paylines. Players can try out the game in demo mode for as long as they want before placing real money bets. The real money bets are based on coin sizes that range from $0.01 up to $10 with a maximum bet per spin allowed of $250. The game is offered online and at mobile casinos. Online players can download the casino game directly to their computer or opt for the instant play version of the game that is played directly from the web browser of the casino. The mobile version is played with touch controls and can be played on both Android and Apple devices, it is played in exactly the same way just with touch controls instead of a computer mouse.

All the symbols are important, but it is the wild and scatter symbols that bring the player more payouts and the bonus games. The wild symbol is the last king of Egypt himself and when he appears on the reels, he can substitute for other symbols in the game and complete winning payouts by doing so. On his own, the king is generous and the highest paying symbol in the game awarding players 9000 coins when five appear on an active payline. Four of the king’s award players 1800 coins. Three award the player 90 coins and two award the player with 15 coins.

The scatter symbol is one of the icon landmarks of Egypt, the sphynx. When appearing on the screen, its rewards players with multiplying payouts of up to 100x the coin bet placed if five appear on a payline. Three and more of the scattered sphynx symbols awards the player with 10 free spins. During these free spins all winnings are tripled, and the player can trigger a further 10 free spins that are added to the remaining amount. The graphics of the Last King of Egypt slots are clear and precise, and the game is very well laid out and easy to play offering players a number of exciting and rewarding payouts in addition to the chance of winning lots of free spins.
Play Now

Where to Play The Last King of Egypt Slots