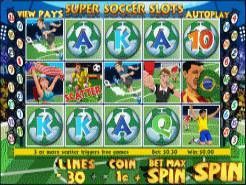 Play Now
The Super Soccer slots game is a perfect way to relive the action and atmosphere of the Brazil World Cup. Soccer is an international sports game that everyone can enjoy, both fans and players get something out of the game. Players can enjoy this game from WGS Technology both online and through mobile devices. The online version is available to download directly to the computer of the player, or he can access it through the instant play version without downloading the casino or game. The mobile version of Super Soccer slots game can be played at both Android and Apple devices whether playing on a phone or a tablet. With every platform the player can try out the game in the fun mode before placing real money bets.

Super Soccer slots is set on a bright green soccer field surrounded by fans. All the symbols in the game are about the soccer. There are footballs, fans, umpires, soccer balls and international flags that fill the screen. Super Soccer has five reels and thirty payline. Players need to line up three or more of the same symbols on the screen in order to earn a payout. When the player is ready to place real money bets, he can choose coin sizes that range from $0.01 up to $10 and choose to place bets on one or some or all the paylines. The maximum bet possible is $30 per spin. There is an auto play option for players that like to preset the number of spins the game runs for and this can be set to run up to 100 spins consecutively that stop automatically when a bonus game is triggered.

The Big Payouts and Bonus Options

Lining up three and more of the same symbols on the screen awards the player with generous payouts that are all detailed on the pay table screen. The circle of international flags is the wild symbol that when appearing on a payline with other symbols can substitute for other symbols appearing and help complete the payline, awarding the player with higher payouts. The wild flags also happen to be the highest paying symbol in the game awarding players up to 25000 symbols when five appear on an active payline. Four of the symbols award the player 5000 coins, three award the player 500 coins and two award the player with 50 coins. The scatter symbol is the yellow shirted player who is just going in for a good kick. He offers the player payouts of up to 1000 coins when five appear on an active payline and three and more of these symbols on the screen trigger the free spins games. Players are awarded with 10 free spins during which all winnings are tripled and if the player is lucky enough, he can trigger a further 10 free spins that are added to the remaining amount.

Super Soccer slots is a super game in many ways and one of the best features of the game has to be the knockout bonus game. The bonus game is triggered when the bonus symbol appears on reels 2 and 4. The player is taken to a new screen where he is invited to choose a country and kick the ball, hoping for a goal. The player has three chances to get the goal and each time he scores; he is awarded with a bonus payout. At the end of the bonus game the player is taken back to the main screen to continue playing the base game or he can choose the gamble option. The gamble option is possible at the end of every winning spin. Players that choose the gamble feature are taken to a new screen where they are presented with a two-sided coin and are invited to guess which side, they think the tossed coin will land on. A correct guess of heads or tails doubles the winnings for the player, but an incorrect guess will lose the player his winnings for that spin. Super Soccer slots is one of the best games from WGS technology offering many different fabulous bonus options, free spins, gamble and the knockout bonus game allowing players both online and mobile access at any time of the day or night.
Play Now

Where to Play Super Soccer Slots