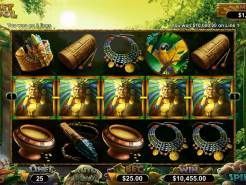 Play Now
The Aztecs were a race with a rich history and also a certain style about them that has remained with the South American people today. Secret Symbol slots takes players back to the ancient Aztecs who lived in the monsoon forests of South America where they worshipped idols, had a chief that they listened to and made some beautiful artifacts and jewelry. This colorful tribute to a fantastic race has five reels and twenty-five paylines. There are also two random progressive jackpots that can be won at any time when playing the real money version of the game. Both the major and minor jackpots increase in value with every real money bet that is placed and can be won during the base game and at the end of any of the free spins.

The Aztec Chief is wild and appears on reach of the reels where he can substitute for other symbols in the game and help to complete winning payouts. On his own the Aztec Chief is a very high paying symbol giving players 10000 coins when five appear on an active payline. When the Chief appears on reels 2 or 4 at the same time, he will expand to cover each reel before the winning payouts are calculated. The ancient pyramid is the scatter symbol awarding players multiplying payouts if two or more appear on the screen. Five of the scatters give the player 500x the coin bet placed, four give the player 10x the coin bet placed, three give the player 3x the coin bet placed and two give the player 2x the coin bet placed. Three and more of the scatter pyramids also reward the player with 10 free spins. After each free spin a secret symbol multiplier is revealed that is applied to any winnings earned. the secret symbol multiplier can be anything from 2x-20x. Free spins can be triggered again, and the player can win either of the random progressive jackpots at the end of the free spins games or the main base game spins. Ancient civilizations mixed with modern technology allow players to enjoy Secret Symbol slots online and through mobile devices, both Android and Apple.
Play Now

Where to Play Secret Symbol Slots