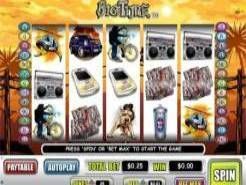 Play Now
Big Time Slots from WGS technology takes players to the race tracks and roads of the hood where gangs hangout and play music, women woo the men and the men try to prove how good they are not just with the music they listen to but also the races that they take part in with the special adapted cars that are super powerful. Big Time slots is available to download directly to the players computer or he can access it through the instant play version of the casino and the player can enjoy the game on mobile devices. Both Android and Apple devices offer Big Time slots and players can try it out on any platform in fun mode before placing real money bets.

Big Time slots is a five-reel game with twenty-five paylines. Players can try out the game in fun mode before placing real money bets using coin sizes that range from $0.01 up to $10 per spin. There is an auto play option or players that want to preset the number of spins the game runs for and this can be set to run up to 100 spins or the player can choose to manually hit the spin button for each game. The player does not have to bet on all the paylines, he can choose to bet on just one or a few, whatever suits the budget that he has set for himself.

The Bounce Off Bonus

Where to Play Big Time Slots