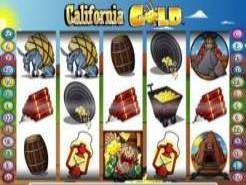 Play Now
The Gold Rush was huge, and many people travelled from all over the country and some from different countries to try and be a part of the Gold Rush in California and find some of the all-important nuggets. The more the nuggets weigh the more they are worth and the richer the miner becomes. Unfortunately, there was a lot of competition with the miners and each one tried to outdo the other and find more nuggets. California Gold slots gives players a taste of what it was like to live through the gold rush. Based around one of the mines of California, the game includes dynamite used to blow the mines, barrows filled with gold nuggets, chisels to hack away at the rock where the gold may be hiding, mine entrances and maps to find the best areas.

California Gold is a video slots game with five reels and twenty-five paylines. Players can try out the game in fun mode before placing real money bets of up to $10 per coin size and choosing to place bets on all or some of the paylines. There is an auto play option for players that like to preset the number of spins the game runs for consecutively and players can set this to run for up to 100 spins at once or stop it at any time. California Gold can be downloaded directly to the players computer or the player can choose the instant play option offered at many casinos where the game is played directly from the web browser of the casino and in addition this game can also be played at mobile casinos. Both Android and Apple devices offer the California Gold game where players can enjoy the trials and tribulations of the gold rush while on the move or at home or anywhere.

There are a number of special features in the game to look out for. The wild symbol is the miner and he appear on reels 2, 3 and 4 where he can substitute for other symbols in the game and complete winning payouts by doing so. When the miner is used to complete a winning payout, the winnings for that line are doubled. When the miner appears on reels 2, 3 and 4 at the same time the player is treated to a chance to play the bonus game. The player is taken to a new screen where he is invited to grab at gold nuggets as they come out of the mine. At the end of the grab, the nuggets are weighed, and the player receives a bonus payout based on the weight of the nuggets and the coin bet placed.

Where to Play California Gold Slots