Gold of the Gods Slots 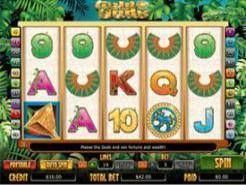 Play Now
The Gold of the Gods was always hidden from the common people. It is a special gold that only the gods could touch. The Gold of the Gods slots game from WGS technology, one of the leading slots developers in the world, takes players behind the scenes where the gods live and handle the gold and seem to have a good time. The setting for the game is a lush green forest where the player can meet the god, his wife, the scepter that he uses to empower people and objects, his special mascot and different sundials and other objects that only the gods know how to use.

Gold of the Gods slots is a five-reel game with twenty-five paylines. Players can try out the game in fun mode before placing real money bets giving them a chance to get to know the game. This slots game is available to download, and players can also access it online through flash casino play. In addition, a mobile version of the game allows players to enjoy Gold of the Gods slots from anywhere and at any time of the day or night. Players, when ready to place real money bets are able to place coins per payline and can choose coin sizes that range from $0.01 up to $5 per spin giving the player a wide selection of betting options and versatility. Players can place bets on all or just some of the lines. There is an auto play option for players that want to preset the number of spins the game runs for. The auto play can be stopped at any time and the player reverts to manually hitting the spin button.

Every symbol is a winning symbol when playing Gold of the Gods slots but there are a number of symbols to look out for which offer higher payouts and lead to special bonus games. The god himself is the wild symbol and he appears one each of the reels where he can substitute for other symbols and create winning payouts by doing so when the other symbols are all the same on the payline. On his won the god is a high paying symbol awarding players 10000 coins when five appear on an active payline, four award the player 2000 coins, three award the player 500 coins and two award the player 10 coins. Lining up three and more of the same symbols brings the player payouts.

Where to Play Gold of the Gods Slots