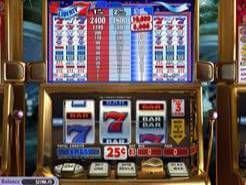 Play Now
Liberty, freedom and justice are part of the mottos of the United States and many other countries in the world. The Statue of Liberty sits at the entrance to New York on Ellis Island welcoming all new immigrants and reminding them of their freedom. WGS technology, a top software company that creates incredible games for the gambling industry created the Liberty 7’s slots with the principles of the United States in mind. The game is filled with red white and blue, the colors of the United States flag and for some the symbols of freedom and democracy. This game is available to download directly to players computers or the player can access the game directly on a casino web browser by choosing the instant play version. Liberty 7’s slots can also be played at mobile casinos, being available for Android and Apple devices whether playing on a phone or tablet.

Getting to Know the Game

Liberty 7’s Slots is a three reel classic slots game that has one payline. Players can place one, two or three coins per spin and have a wide selection of coin sizes to choose from that range from $0.01 up to $10. Players are able to try out this game in the demo mode before placing real money bets. The demo mode can be played for as long as the player wants. One the screen of the game, players will note the three reels that contain spinning symbols and a red line that passes through the reels, this is the payline. The symbols in the game reflect the patriotic tone of the game and include red, white and blue 7’s, three bar symbols, two bar symbols, single bar symbols and blank spaces. Under the reels are the activation buttons. These include pay table, auto play, bet one, spin reels and bet max. The auto play option allows the player to preset the number of spins the game runs for and at any time he can halt this and carry on with the manual clicking on the spin reels button. The pay table details the full payouts possible in the game.

Apart from the pure genius and fun that this game offers, players will also feel very patriotic when playing Liberty 7’s slots. It is filled with red white and blue symbols on a background of red, white and blue streamers. The game can be played online or through mobile devices and is available all day and every day for players from all over the world to experience the delights of Liberty, Freedom and Justice through simple rewarding gaming.
Play Now

Where to Play Liberty 7's Slots