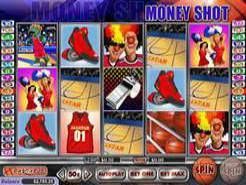 Play Now
The Money Shot slots game takes place on a lively basketball court where the players are heading for the shots and the fans are cheering on the side. Mascots enter the court at half time with the special cheerleaders and there are special red basketball shoes and the kit that make up the symbols of this game. Money Shot slots is presented and created by WGS technology and is an action-packed video slots game that offers many different winning payouts and can be played online or through mobile devices. Players online can download the game through their casino to their computer or laptop or they can access it online through the instant play version of the game.

Money Shot slots is a video slots game with five reels and twenty paylines. Players may enjoy the game in fun mode for as long as they want and when ready to place real money bets, the options range from $0.01 up to $10 per spin. The player can also choose the auto play option that allows him to preset the number of spins the game runs for. The auto play option can be set to run up to 100 games consecutively and at any point the player can stop this and revert to manually hitting the spin button. The symbols of Money Shot slots include many basketball symbols such as the ball, mascots, cheerleaders, basketball shoes and plenty of fans.

There is an additional bonus symbol noted by the basketball. When the basketball appears on reels 21 and 4 at the same time the bonus game is triggered. Players are taken to a new screen and invited to choose one out of eight nets that they shoot, then they are invited to choose one of out seven nets and shoot, followed by one out of six nets and shoot. Random prizes are awarded for all these shots and the player is taken back to the main game to continue playing Money Shot slots and hoping for more action and more winning payouts.
Play Now

Where to Play Money Shot Slots