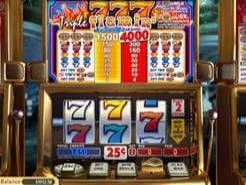 Play Now
Sometimes the classic slots games are the most exciting and rewarding and this Triple Flamin 7’s Slots from WGS Gaming proves the point once again. WGS gaming is a well known and respected software company that has years of experience in the field and is known for its fair and responsible gaming. The Triple Flamin 7’s Slots game is one of the flagship games of WGS offering three reels and one payline, making it classified as a classic slots game. Classic slots games are considered three reels with one or more paylines and are relatively easy to play offering high rewards against the bets placed.

As the title of the game suggests, Triple Flaming 7’s slots is all about the burning 7’s. All the symbols in the game are 7’s in different forms and colors. There are 7’s in blue, white, orange and yellow and there are 7’s with red hot chili peppers next to them and 7’s that are burning in a flaming furnace. Players may place one or two coins per spin and are able to choose a coin size from a huge variety that starts at $0.01 and reaches as high as $10 giving a maximum bet of $20 per spin. As with all good slots, and all the slots games from WGS, players can try out the game for fun in the demo mode before placing real money bets. The demo mode can be played for as long as the player wants and until he feels comfortable placing real money bets.

The Winning Strategy and Options

Since the game of Triple Flamin Slots is based on luck it is very hard to know what the best strategy of the game is. After trying out the game for fun, it is best to start with low value bets and increase the value of the bets as the player becomes more confident. The highest payout in this game is awarded for three of the burning triple 7 symbols, with a two-coin bet. The player can earn 4000 coins for this configuration and bet and with a single coin bet and three of the burning 7’s the player wins 1500 coins. The burning triple 7 is a wild symbol and when appearing on the payline it acts as a wild and can substitute for other symbols and complete winning payouts by doing so. One of the burning triple 7 symbols on the payline triples the payouts and two of the triple 7 burning symbols will multiple the payout 9x. The next highest paying symbol is the 7 with the chili peppers that awards players 300 coins for a two-coin bet and 150 coins for a single coin bet.

Triple Flaming 7’s slots can be played online by downloading the game directly to a computer through the chosen casino or it can be played in the flash format directly from the web browser of the casino. And for players who are always on the move, the mobile version of Triple Flamin 7’s is the best option. This gives players a chance to enjoy the game from anywhere whether playing on an Android or Apple phone or tablet. Triple Flamin 7 is an easy to play game with huge winning potential for each player and it is accessible for all players at all times of the day and night offering an easy and fun and definitely colorful experience.
Play Now