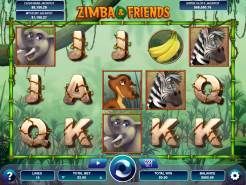 Play Now
Zimba is the cutest little lion that lives in the jungle with his fellow friends, the zebra, giraffe and elephant who all live in the jungle and feed off the delicious looking fruits that grow on the trees. Zimba and Friends slots has five reels and twelve set paylines. Players need to play all the lines in order to be able to win. The game also includes three different random progressive jackpots. The cash grab jackpot, the mystery jackpot and the super slots jackpot can all be won at any time when playing the real money version of this colorful slots game.

There are no scatters when playing Jungle fun with Zimba and Friends but there are two different wilds. The first wild is a monkey that appears on reel 3 only and when he does appear on the reel, he can expand into one of many different positions giving the player more bonus payouts. The monkey in his expanded position stays in place for the duration of up to 6 respins. The giraffe is the second wild and he appears on reels 2 and 4 only where he again can expand, but this time vertically and once expanded the player is rewarded with up to 6 respins with the giraffe remaining in his expanded position. The progressive jackpots cannot be won during the respins, but the player can win plenty of bonus payouts that contribute to the fun and rewards offered in this colorful jungle themed game.
Play Now

Where to Play Zimba and Friends Slots