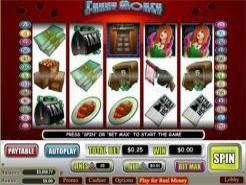 Play Now
There are some seedy places in town where not everything appears at it seems. This is exactly the case of the Funny Moolah slots game where the big boss runs a nightclub that has some interesting characters in it and the police are always on the trail of the big boss trying to catch him out, and make sure he pays his tax bill. Every single symbol in this game is a reflection of the dirty dealings of the Big Boss including a fancy car, the club entrance, the boss, illegal crates of booze, an unpaid tax bill and loose dollars. Funny Moolah is an online slots game that can also be played on mobile devices. The online version can be downloaded directly to the players computer or played via the web browser by hitting the instant play button and the mobile version is available for both Android and Apple devices.

Basics About the Game

The game of Funny Moolah is filled with color and has five reels and twenty-five paylines. Players can try out the game in fun mode for as long as they want until they feel comfortable placing real money bets. The real money bets are placed with different coin sizes that range from $0.01 up to $2 and players can place up to five coins per payline. Bets can be placed on all the paylines or just some of the paylines, the choice is personal. There is an auto play button for players that like to preset the number of spins the game runs for and at any time the player can stop this and revert to manually hitting the spin button.

The Big Boss with his fat cigar is the wild symbol. He only appears on reels 2, 3, and4 where he can substitute for other symbols and complete a winning payout by doing so. When the Big Boss appears on reels 2, 3 and 4 at the same time the player is treated to the Boss Man feature. In the Boss Man feature, the player is presented with 9 piles of loot and he is invited to select four of the them. Each pile of loot will reveal an amount and the total of all choices is multiplied by the coin bet placed, giving the player a bonus payout.

Where to Play Funny Moolah Slots