Robin in the Woods Slots 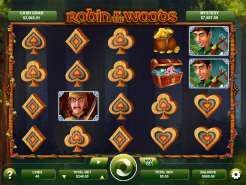 Play Now
Robin Hood stole from the rich to give to the poor, he worked with his band of merry men and was hated by the local sheriff of Nottingham who was constantly chasing him and the love of his life, Maid Marian. Robin in the Woods slots is a colorful and clear slots game with five reels and forty paylines that takes players back in time to Sherwood Forest and the antics of Robin Hood. Players can enjoy this game in the fun mode online or through a mobile device before placing real money bets. The coin size options for real money bets range from $0.02 up to $6 and the player can place up to 40 coins per line with a maximum bet of $240 possible.

Symbols in this slots game are all clear and colorful and include Robin Hood, Diamonds, Clubs, Hearts, Spades, a treasure chest, a sack of gold and a wooden wild symbol. There are three main bonus games in the Robin in the Wood slots game in addition to two random progressive jackpots that can be won at any time when playing the real money version of the game. Both the Cash Grab Jackpot and the Mystery Jackpot increase in value with every real money bet that is placed. Two of the arrows and a locked vault symbol on the screen trigger the locked vault bonus game. In this the arrow is shot and the reels slide away with the arrow hitting the vault and opening it to reveal a cash prize. The Bullseye bonus is triggered when the arrows appear on reels 1 and 5 with no vault symbol. The player will then see the arrow shooting on three different symbols turning them into sticky wilds that remain in place for three re-spins.

Maid Marian is the eternal love of Robin Hood and she is also the trigger for the free spins games. Three of Maid Marian symbols appearing on the reels will trigger the bonus free spins where the player receives 10 free spins with one of two bonus extras. Before the free spins start, the player is invited to choose one of two hearts. The hears hold either the extended wilds bonus or the sticky wilds bonus. If the sticky wilds bonus is chosen, the player benefits from a sticky wild for the duration of the free spins and if the extended wilds is chosen the player will see two arrows shoot that may hit one or two symbols. If hitting two symbols, the symbols become wilds and the wilds will remain in place for the remainder of the free spins. There is a random jackpot game that is in addition to the two random progressive jackpots. If the golden arrow random bonus game is triggered, the reels melt away and make room for a target. The player shoots the arrow and can win the major, minor or minor payout. The major payout is won for landing the arrow in the center point, the minor for the outer rings and the mini for the most outer rings. Robin in the Wood Slots is filled with action and bonus opportunities leaving players filled excitement and maybe some good winnings too.
Play Now

Where to Play Robin in the Woods Slots